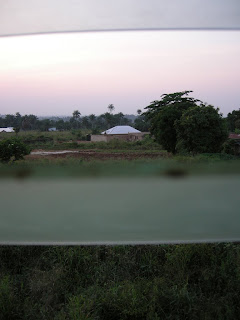 This book was given to me to read by a neighbour of mine who obviously sees some links between me and Mary (sister to writer Charles Kingsley) in terms of my travels to Nigeria, and perhaps previously to Kenya. I may be a bit feisty at times, but l hope this is where the similarity ends!

The times when this was written reflects the Colonial era and so there is a lot to disagree with and she was obviously from quite a wealthy background. However there are some quaint stories in it which are fascinating and are somewhat reminiscent of my experiences in Africa which l am finding very amusing eg. the papaya story and how good for the digestion it is, etc. It is also interesting to read from a woman's point of view and has a lot of ethnographic information which may be useful/interesting.....so l will read on.....
Posted by Kate Parsons at 02:49 No comments: 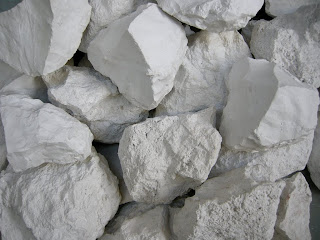 During Open Studios at Spike Island (Bristol) Richard Long came into my studio to look at my work, I of course was fumbling around with reading matter on my desk at the time and did not notice him. Anyway cutting a long story short (forgive the pun) we engaged in brief conversation about the work and he had thought the rocks l had cast were made out of chalk and he said he like them.....great! They are 'Herculite 2' (plaster) for the record!!

These are piled up on the floor in a shape that resembles a grave and is just one element of the installation l am making called 'Matter of Interpretation', based on my experiences in Nigeria recently.
Posted by Kate Parsons at 02:40 No comments: 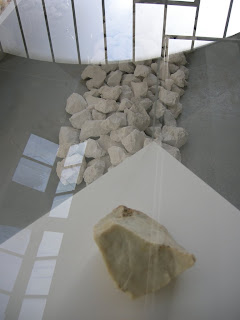 This post is made in reference to the previously mentioned article 'Cloth and the Corpse in Ebira' by John, and the subsequent questions l posed about the rocks he had seen in this article, as l am currently casting rocks for an installation based my own Nigerian experiences. I was interested in what he had to say concerning the function of these particular rocks, and whether he had any images of them.

I also asked him to comment on a Radio 4 programme 'Crossing Continents' - 'Uganda: Battling the Witch-doctors' (7.1.2010) with reference to human sacrifice, which l came across in my own research in Nigeria.

Dear Kate,
As to the pile of stones, yes I do have photos on one of these (I also saw one other). It is a circle of smaller stones in a rock shelter (in the other case it was at the foot of a particular tree) with a larger flat stone placed on top. To listen to the eku in the earth those responsible lifted the flat stone off and leaned over what is presumed to be a hole dug down into the earth at that point and surrounded by the smaller stones; and then they knelt over it to listen ...

On the question of child sacrifice, I did listen to the programme about Uganda, and noted one example cited from Nigeria. It is impossible to say these things did not happen, or do not continue to do so. The mythic foundation of Oshogbo, that famous Nigerian city that you may have heard of, includes the sacrifice of a baby buried in the ground where the city was to be founded. In modern times, situations of moral and social breakdown are known to induce the kind of paranoia that leads to human sacrifice; and the possibility was always there. There were certain funerary rites in Dogon (that paragon of "traditional" culture) which were said to demand human sacrifice. In Ife, when Frank Willett saw sheep gagged prior to sacrifice he was told that that was how they gagged human victims prior to sacrifice, something you can see in the imagery of Ife in the current show at the BM. This was to stop the victim cursing his executor. There's famous print showing a group of British naval personnel at the Asante court in the early 19th century, where a sacrificial victim is paraded before being killed with a knife pushed through from one cheek to the other again to prevent him cursing his killers. In the Uganda cases, while the confessions could be the confessions of fantasy, they could equally be true. There is no way of knowing. In the Nigerian case in that programme, it was the description of a Bollywood film in which a live baby was crunched up by a pestle and mortar; and I presumed that no matter how horrific the imagery, that it was cinematic trickery. Whether or not it was that, it was evil; and the sacrifice of a real baby was even more evil. You may remember the case of a boy's torso being found in the Thames, and there was a police hunt for the killer on the assumption that it was a human sacrifice; which it might have been , but this would not be the only explanation. Suppose someone had come into this country illegally with a child, and the child died (ie of natural causes) there would be a need to dispose of the corpse without being found out. Not good may be, but not necessarily the evil of sacrifice. The trouble is too that we forget what that human sacrifice was not a peculiarly African thing. The Bible has quite a lot to say about Moloch, a middle eastern deity that demanded the burned offerings of children, and we know archaeologically that in pre-Christian Carthage, babies were offered to be burned at the shrines of Phoenician deities. In India, the god Kali demanded human sacrifice. Even in Britain and Gaul it seems probable that the Druids sacrificed humans, though almost everything written about Druids apart from the fact that they existed is entire fantasy. It is altogether a pretty sorry story; but at least one can say of the Abrahamic religions (Judaism, Christianity and Islam) that they stood out against human sacrifice; which is in no way to suggest that European history is free of such evil nastiness. Human history is such that we all have blood on our hands.
Posted by Kate Parsons at 15:09 No comments: 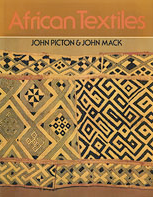 In Professor Picton's article 'Cloth and the Corpse in Ebira', he records similar attributes that l presented in my film 'Night'based on my research in Owerri, S.E Nigeria recently - see website www.kate-parsons.co.uk

"black, a term that includes the color of indigo dye, is a color with varied associations: the prestige of owning an indigo-dyed gown; the disgusting sight of soot on the face of the smith in this smithy; the dangers of the night as a time of metaphysical activity, including masquerade and witchcraft. "Night" was indeed sometimes used as a euphemism for witchcraft, and sometimes as a metaphor of death; and night is black'.

The other extract from this article reminded me of the function of the Giriama Commemorative Grave Posts l investigated in East Africa but here it is the cloth that acts as the link between the two worlds of the living and the dead, although in both cases the ancestors were very much 'alive'.

"The word eku clearly and literally determined the identitiy of masquerade with the other world. Yet it was the use of itokueta that determined the identity between what had once been a person living in this world and the manifestation of that other domain of existence in masked performance. Dressing in itokueta was the manner in which one entered eku and revisited this world as eku. It was this particular form of textile, whether directly as artifact or indirectly as an idea about an artifact subsisting within an innovative tradition of practice, that manifested and enacted the continuity between living and dead, between ehe and eku."