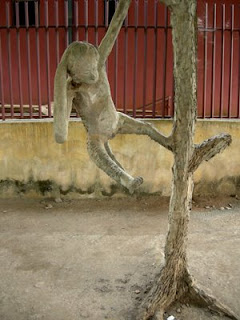 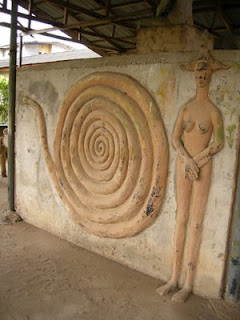 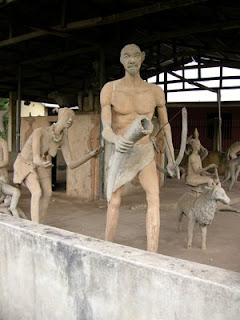 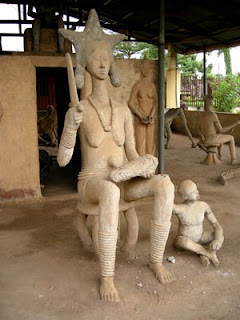 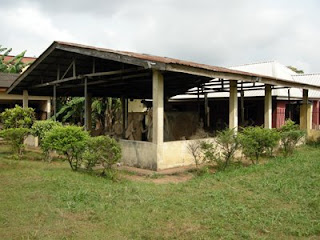 This Mbari is built in honour of the goddess Ala. She is holding a Yam (famine/food) in one hand to bless the harvest and bring fertility, and she holds a knife in the other hand, which usually signifies strength. The coils around the ankles and wrists denote a Queen or deity.

God of War (Amadioha, or god of Thunder) is always followed by a begging wife, Ehehe and the Ram ( his messenger). The expression of this varies with each artist - see the previous image of Amadioha in Mbari 1.

The Python is the messenger of Ala and here is also depicted Nworie, the rain deity, and crocodile which is associated with water.

The Chimpanzee is considered to be evil and is the Igbo forest monkey called Ozodwigba.
Posted by Kate Parsons at 08:48

Amadioha is not the God of war, but the god of Thunder! War comes into it only if it is the plan to fight the particular war with thunder. He is never always followed by a begging wife.

In this particular situation(which must be the play of a scene in the artist's mind), he was going to carry out some action(presumably a disastrous one), and his wife begs him to pardon (typical of wives and women in general), which in some way narrates an everyday life situation. The ram is his acting force through whom he carries out his missions.

The forest monkey is called "Ozodimgba".