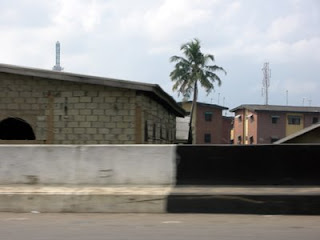 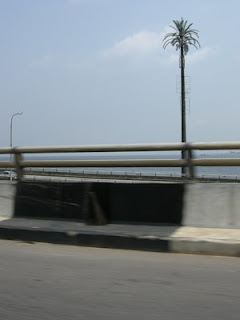 Saw what looked like extraordinarily tall palm trees in both Abuja and Lagos...basically masquerading telecommunications again with their canny subterfuge! Spot the difference! This made me think about all the satellite masts here in UK that are hidden and might be a bizarre photographic project.

Great sign above the dual carriage-way today read, "Decrease your speed, INCREASE your thinking!" Likewise a slogan for a bank "Think Possible"! The latter became a bit of an incantation for the whole trip! - seemed to work!!!

Mayo arrived in his traditional dress with the Yoruba hat which he explained meant different things when it was folded in different ways - tonight it was in the rebel position...I like it!! The hat can be folded in five different ways, forward for rebel, folded on the left means son of the soil, over to the right means power and change, flapped back means there are still matters to be resolved (after a meeting of elders indicates a bad meeting), and if it is standing upright it means he wants to have fun....a bit cheeky!!!

I had a long productive talk with Mayo tonight and ran a few of the questions by him that l was maybe going to ask people in the field and at the talks l was going to deliver. He has previously worked with Susanne Langer in the Oshun Grove in Yorubaland and apparently she is now in her eighties and still only taking local medicines! He has also worked with Gill Salmon and the late Keith Nicklin, who have both researched in the same region as me and have written about the influence of the Cross River people (neighbours) to the Igbo of Owerri in effect. Gill has previously researched the Mama Wata shrines in South East Nigeria.

Mayo said travelling across borders has been the main influence on the art produced and the introduction of modern media from the West such as new paints, tools, cement and plastics. When I asked him about the concepts of Mbari he drew parallels with his own traditions which he split into 3 categories a) concept b) belief and c) totemic elements in reference to the making of an object. Artistically the artists involved with making a totemic figure would follow a general tradition of representing this figure according to local beliefs but he said that the artists would also have free reign to individualise their piece of work. In reference to styles he said if there is a repetitive style it is usually because it sells, so if the work does not sell there is more experimentation until the work does sell or become popular. I found in Kenya too that if a certain carved object sold well others would copy it in order to sell as well - selling art in African countries is a necessity (with no welfare system or health service) and with less call for traditional objects commissioned by the traditional religious practices their patrons are thin on the ground. However Mayo thought that if an artist does obtain patronage, as with traditional carvers, it follows that this would allow them more time to think and contemplate the outcomes for their work, leading perhaps to more innovation.

The topic of cultivating an African audience and patronage for art was a popular discussion point after each lecture l gave in Abjua and the Universtiy of Nigeria, Nsukka.
Posted by Kate Parsons at 08:37