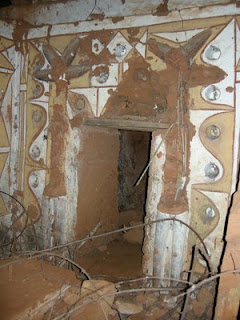 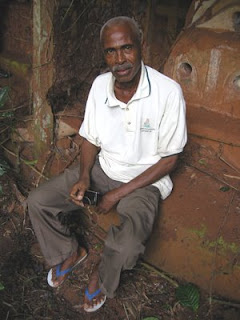 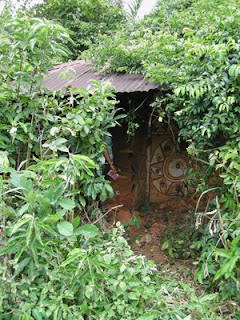 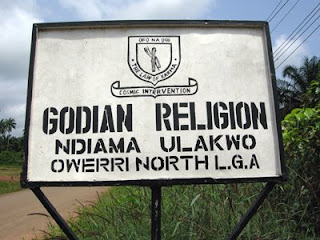 Had to go to the Ministry of Arts and Culture again to submit the letter we wrote yesterday – seeking permission to do the study / survey. This was quite chaotic as usual and things taking more time, more people to meet and greet, and write letters too! Half the time l don’t know what is going on as a lot is said in Igbo and Amara edits out a lot of the chat. We seemed to trail around from office to office [ This was all before we got to take the photos!]

The interviews methologically speaking were semi structured interviews, however at times due to Amara and the Reverend not being versed in academic research became a bit chaotic at times with some digression and loss of focus, due to too many people chatting at the same time, and amongst themselves in Igbo, which was not translated. So l had to steer the questions back again to gain some parity between sites and informants.

Briefly the questions asked were concerning the concepts of Mbari, the materials and processes used including the rituals, the symbolism, use of colour and shape and different elements included, how they perceived Mbari today, how outside influences effected Mbari, and why people still consulted a diviner even if they no longer practiced the Mbari tradition, if this was the case.

In most cases the informant was the High Priest in charge of the Mbari, a relative of one or a person who was likely to become the custodian in some shape or form. We later visited a diviner and some artists who had a direct relationship to Mbari making.

Obiala is the goddess of the community in this particular village in Ulakwo.

The Mbari was built by the informant’s father, Chief Anyanwu Opara. The Obiala people from Ulakwu, migrated from Mbaise to Ulakwo, but they originally came from Inyogugu village. This is the third Mbari built in honour to the god Obiala in this area – who helped people travel safely and settle here peacefully. There was a central figure and four messengers. It was built in 1956 but he built it on his own [which was unusual] with a wall all around it [which was usual]. He said the community did not help built it because he made it to last (otherwise it would not have lasted). In 1962 it was exposed and the celebration festivities began. The servants or messengers are called Nwaujemgbe. The lioness acted as protection and as a messenger, and the python was a very important element as a messenger (symbolised by the coil on the post). If you kill or eat a python then you must give it a human funeral as if it is an old man, with all the necessary rites– this latter event happened in 2004 with a python that was wrongly killed and eaten (these snakes are considered sacred).

Bowls set into the walls were used for decoration but they used china or enamel because it lasts longer. They do not use plastic as it changes colour.

They beautified the wall with yellow ochre/sienna/white pigments which were natural elements originally - they did not allude to anything symbolic here in the use of colour. When asked about preference for red earth or cement in the construction they said that cement was not natural, but gave no reasons other than this. Mbari he said was still in existence and the New Yam festival is still celebrated and yet people still go the church! He is Catholic but still adheres to the traditional religion and this has only changed because of Western religion. Women are always waiting to get married and now want a certificate – but he said his wife also wanted a church wedding for this reason, but the traditional practices will never die away because it is their history.

Mbari is more Christian now- it has altered and become hybridised eg. Yam festival is the blessing of the Yam harvest and those harvests to come. Mbari is not a religion (and yet this is contradicted later on!) Mbari is 'fetish'. Now they believe the gods to be their own Christ.

Community never wanted it to die therefore they still practice it. The first son is supposed to take it [the religious duties of the Mbari] on – community may make him take it on, even if he is working on some other job eg.engineer.

The two plates are for offerings put in front of the god – the reason for the plates is that these are offerings/food.

Termite mud is used. As regards the binary oppositions he identified the secret rituals connected with night and day, and female and male activities. Sacrifices were done at night here in the 1960’s. There are three pots or calabashes which are used in the shrine, where sacrifices are made, these are called Chi, Eke and Uwaoma (as previously mentioned The god, the wife and the son). Told the story of an old man who died and two dogs were killed for him at night and two dogs in the afternoon as demanded by the father before death – how many dogs depends on the dead person’s status. This was done to make the man brave (dogs are perceived to be brave and intelligent) and possibly in this case literate – therefore reincarnated with these abilities – believes his son is the father reincarnated, as he is now literate. At death you often slaughter 3-4 'he' goats, 1 fowl, 1 hen and 1 cow. Left or right hand must be held down (associations with Ikenga) and a sacrifice has to be made, but only for a great man. Three reasons for the sacrifices are 1) bring hand down 2) strengthens his heart or character and 3) attracts favours, when he is reincarnated.

The shape of the Mbari must be square with four corners. The central space is always sacred – even the High Priest fears going in there. People at the top of this Mbari were called Ndiocha Ulonely (Clerks) or spies – keeping watch for strangers. Preparation for the year in terms of harvesting runs as follows:-Farming (sowing the tubers or seeds/peace), rest period (and a time of Ofo and Ogu or cleansing/purification), harvest (actively collecting in the produce and lastly peace ( period of thanksgiving and rest). This is the pattern of the year to ensure a good harvest or celebrate one. Nze Azuoma Anyanwy had a mobile phone as everybody seems to have here even in remoter places! - rather an odd juxtaposition when their daily living seemed to be quite basic, but obviously a useful tool for communicating beyond the village, for trading purposes and speeding up communication with relatives working further afield.

He said that the python still lives in this Mbari.
Posted by Kate Parsons at 05:07