10.11.08 Ministry of Arts and Culture/Arts Council 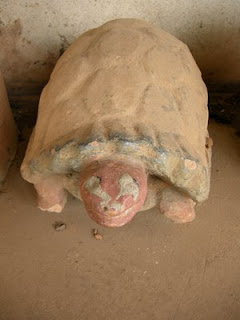 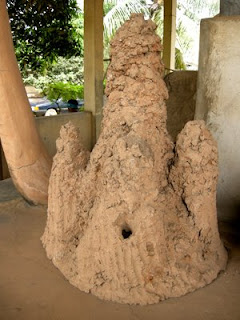 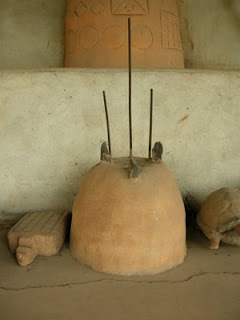 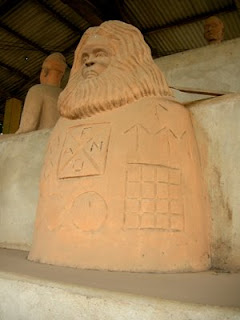 Had to write a letter about the project for the Federal Ministry for easier access to the different areas we plan to visit for the research to ‘avoid bother’ – more bureaucracy! This letter did the rounds and took ages to gain permission to photograph the two permanent Mbari structure here. They also wanted to flog their own rather bad photographic prints of a few of the figures, which Mrs Okolie kept in draw in her desk!

There seems to be separate factions concerning Mbari from the people we informally talked to – those for it continuing at least for historical and cultural purposes, and those brainwashed against it entirely through conversions to Christian religions.

She comes from Ezinitte-Mbaise (Village) and this is what she says about Mbari:
Diviners are important still within the culture. The Church is not succeeding because they cannot tell you the future or make prophesies to give you some sense of security. The Church is trying to destroy traditional culture by brainwashing. It is not satisfying the inner needs of the people. Evangelism reigns supreme. [According to Rev. Ngozi the deity in her village is Ala-Ogbaga and people would consult the god through the High Priest – this was a local justice system that the Catholics do not get involved with, because it was considered ‘fetish’. This traditional system was a form of admonishment, so if a person stole something they would have to pay a penalty through sacrifice and therefore the culprit would expect some form of penance for their misdeeds. Whereas, the Christians can go to church, be forgiven by God, and go and do it again.] There is some ambivalence here the Reverend's own thinking, being a protestant lay preacher and therefore promoting Christianity, but at the same time also being embedded in the local community with all the traditional values which gives a sense of group identity.

She comes from the village of Oguta and this is what she says about Mbari:
She considers Mbari houses as artworks and not 'fetishes', because we have them in the galleries’. She thinks that this practice of Mbari will be phased out completely and does not appear to care about its continuity in any form.


Innocent Nwoga (contact of Paul Kalu) Chairman of Imo State Council of Elders and political adviser to the Federal government and was a former minister.

Innocent started by saying that he did not know a lot about Mbari but talked about the politics and historical contribution that the Colonialists made to the area - not good!

The colonials destroyed the communal relationships by setting up local rulers (called Ezes) – rather than the traditional priests/elders. Innocent wrote a letter to the government protesting about this administrative system. This Ezee system was not useful because it created internal disputes, and now people go to them to settle their disputes, but the Eze’s cannot do this as they do not have any real power. He said that there were no dominant figures in the Mbari [not strictly true] but there was always a master artist who chooses which figures are included, but there are some that have to be there eg. Ala is one of them, but the local gods vary from one village to another. Each market is protected by a god – and they can use this god to curse people.

After a bit of a fuss we were shown around the Mbari Centre here by Mr Njoku Barnabas, Head of Visual Arts and Museum Services, who gave us information about each figure in the reconstructed cement Mbaris. Mrs Cordelia Okolie did not seem to like us at all and thought we might be sneaky about taking photographs so watched us like a hawk!

Mr Barnabus said that Mbari today is just for rememberence, representative of the cultural past.

Mbari 1
In order to appease the deity the person would have to first consult a diviner. This would be done if the person had seen something odd, wrong, a sudden death, infertility, disease or bad harvest – something that would effect the whole community. The Igbo Mbari construction is a celebration or thankgiving. Ala is the god of fertility.

The Supreme god here in this Mbari is called Chukwu and is the main god here in this cultural centre – which smacks of Christianity. The first Mbari here was built in 1961, a year after Nigerian Independence, by Kenneth Murray (an art educator based in the Zarian school of art). There are different main gods in each Mbari – usually associated with each village.

The symbol of the four market days are depicted on this clay/cement figure of Chukwu, and contained within a diagonal cross in the square, in each triangle is A,E,N and O for the names of the days – Afor, Eke, Nkwo and Orie.

The altar where sacrifices are made by the priest is represented by a mound with three spikes, and three protrusions. Three symbolises three people 1) Chi 2) eke (wife) [chieke] and 3) Uwaoma (son) which can be interpreted as the Trinity in Christian religions.

Tortoise – means wisdom to be taught to children. The tortoise is always used for sacrifice instead of human beings [not entirely true as l was told that human sacrifice still happens ref.Ike in Lagos at the house of Mrs Thomas].

Stool – on which the diviner or high priest sits – used during a sacrifice. [It seems that although animal sacrifices are usually done in the shrines, and not the Mbari houses, it sometimes happens that offerings of dead animals are left mysteriously at the Mbari shrines at night by people in the community].

Ostrich – teacher of the young. Hides its head in the ground and the rest of the bird is exposed which means that if you do evil you leave your family exposed, therefore do not do this in secrecy as you will be found out (your bottom will still be exposed!!).

Nweorie – god of justice (river goddess). Nweorie is the name of an actual river – uses python as an agent (depends on the behaviour of the snake).

Knife – justice. Independent details are often added by the artist.

Decorative mound – represents the extended family and they put a charm inside [usually herbs] which neutralises any evil intent by a visitor to the homestead.

Spirit Agwu – leads people to do evil. Must make sacrifice so that you don’t die a bad death because of the thing that you have done.

Agbara (with open mouth and horns/ears on top of the head) kills the man. All the last four figures represent a group involved with the man with the swollen belly as part of a story/event.

God of Thunder Amadioha – represented by a ram which is his messenger. He creates havoc – also justice eg.land dispute, cheating.

Ofo and Ogu – Justice. Can be almost any shape and any material – certain amount of individualism here. Ofo and Ogu are instruments of prayer which dictate that things are done fairly and seek out the innocence or guilty parties. These objects work together in this respect.

Snake – punishes on behalf of the god of Thunder, and is a messenger from the god which sometimes involves suicide, falling from trees, biting, hanging by the snake (any type of snake) – bad omen.

District Commissioner (Nwa DC) sitting at his desk writing with pen and ink - represents Whiteman and his Rule.

Warrant Chief and his wife and child represents a court and judgement. Indicates ‘Indirect rule’ by the British.

Ikoro – drum. By the beating of this drum people decode the meaning of messages. Used to pronounce festivals and other communications.

Mbataku – hunter of game and makes money which he then stores it in the bank. Symbols for bank and money are circles (manilas) and cowrie shells. Fairness and truth symbols are ofo and ogu (zigzags under his feet).

Chief priest – knows the values of people therefore dictates what figures/deity go into the Mbari house.

Ofo and Ogu – have to be fair. On one of these objects are represented the 4 market days x 24

The river(goddess) is Nwaorie, rather than Nweorie. It can also be simply pronounced as "Nworie".

Giant Alakuku does did not protect 'white people' from Isuochi town(In Abia State, Nigeria). He was an exceptionally huge man, thus his size earned him the job of a body guard to the colonial masters. he also represented a figure of fright, usually adopted by elders to scare children into behaving well. Such as .."If you don't do the dishes, then I will bring Giant Alakuku to smack you"... One of our informants remembered his parents telling him that this giant hailed from Isuochi.

"Mbataku" translates to, as well as represents "the entrance of wealth". Here, it connotes the entrance of wealth into a household, which is the wish of any member of a community. Here, the artist relates (by representing Mbataku as the hunter), that the best way to make money is through hard work. This would be because Farming and Hunting were the major occupation of men at the time.