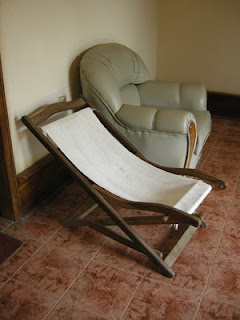 Stayed at home today and chatted to Father Okere again. This rocking deck chair became a favourite of mine.

Very humid again but later when it rained it cleared it for a while. Worked out a shopping list with Chidima, Father Okere's niece, for us all, which came to approximately £100 which we will get tomorrow at the market and £15 for phone calls.

Reverend is coming by car tomorrow to collect us for 9am to go to the Ministry of Culture office and the Arts Council in the same offices, where they have two reconstructed Mbaris on show made out of cement and earth.

Tonight we all looked at the map around Owerri in Herbert Cole’s book and pin pointed the more recent Mbari mentioned in the plates and Father Okere tried to contact people he might know in these areas. He altered the map correcting the spelling of place names and also where rivers began and ended. This was important as these represented river gods too – so this would be important to the cosmology.

When talking about Ala and the old earth Mbari Father Okere said that Ala represented so many things – 1) fertility of both humans and food production 2) the fertility of the land 3) and that often she is depicted with the god of Thunder who is also sometimes considered to be her husband and lastly 4) the earth is important because the ancestor spirits are not supposed to touch the ground with their feet when they walk [this is how they are identified in this world!]. The ancestors are supposed to occupy our world as well (reincarnation) rather than in the Christian religion, which believes that when you die you go to another place eg. heaven.

A lot of festivals are linked with the harvesting of things from the soil eg.YAM in particular.

When l asked about what it was that the Catholics did not like about the Mbari he said, one of the reasons for the religious change was that with Christianity came the English language, education and more chance of work/employment, which was obviously a strong pull. The depression in the 1930’s was global and it hit everyone around the world which was when Mbari had its hay-day around the 1930‘s and 40’s.
Posted by Kate Parsons at 11:17

I got in here while sourcing for information on Mbari arts which I intend to use on my blogsite.I was at the Mbari centre today 29/01/09.I plan to be there tomorow for a guided tour.I am very saddened over the neglect of this valuable heritage of Owerri/Igbo traditional culture.There is need to once again revive this form of arts.I sincerly commend you for your efforts.