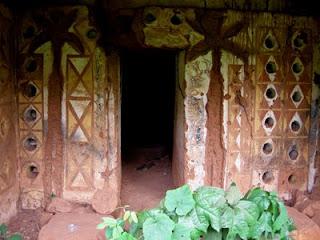 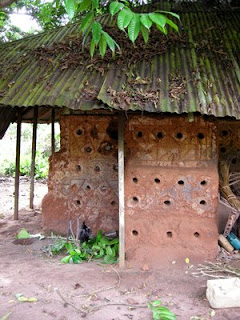 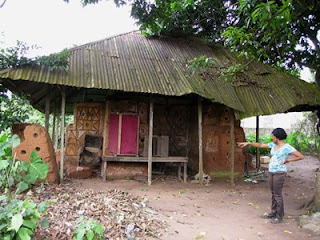 OGAZI CHIAGOROM (brother or uncle) was the last keeper of this Mbari but nobody in charge of this Mbari at present, after Christmas the community will appoint another High Priest/keeper. Father built it to the god of Thunder Amodioha who is god of the village, in Ulakwo. There were barren women here so consulted the god to bring them children – the god Amodioha) granted this and therefore an Mbari was built to celebrate. This Mbari was built in 1920.

The plates incorporated into the walls of the Mbari were for decoration but also offerings to the gods, but because of the church they do not practice this. However they still revere the python but secretly. Catholic church recommended that they just use the Mbari for relaxing but people use it at night for rituals still and visit it.

ANTONY ONYEACHUGBULAM OGAZI (who is supposed to inherit it) is a traditionalist and will not go to church. The god will pick the person to be the High Priest (or keeper). Although MICHAEL UCHE OGAZI (his brother also in the photograph) said that his father said he should be the keeper of this Mbari.

The father (CYPRIEL OGAZI to sons Antony and Michael above) died two years ago and the god is supposed to choose the successor - this was repeated several times! Michael currently ‘feeds’ the god and there is a shrine near this Mbari. Every year the AJU Festival or New Yam Festival is celebrated on the 1st.October – giving thanks for the harvest and the good harvests to come – this is still practiced.

It does not harm anyone to rejuvenate or conserve the Mbari, as the god of Thunder is benevolent. The community built this one. In reference to using either cement or earth, they said it did not matter which it is made of, although (according to Innocent, the first informant here who was Cypriel Ogazi’s brother’s son) there was a preference for earth because of the look but they cannot get the termite mud anymore, or as easily. Shape and decoration is more important than the material. Colonial policeman and white colonial magistrates were part of this Mbari at one time but no longer in existence. The sun (sky) and moon were depicted here too as were day and night (the binary elements). The symbols are just gods creation – clock (time), fabric, two gongs. The ram, sheep or cow are sacrifices used here.

They would not replace the figures with contemporary people if it were to be restored, they want to preserve it with the original figures. [This would not in past times have been in keeping with the Mbari philosophy though!] The separate shrine is used for sacrifice and the elders have to dress up and play the flute. This shrine is adjacent to the Mbari house – the smaller hut (now collapsed) is used to make the sacrifices in.

The Rev.Ngozi confessed in the car that he knows more about the Mbari than he has at first admitted to – he seems to have gained confidence as his interest has grown in this – he knew about the dog killing. He re-confirmed that he thought this system of ‘cause and effect’ was much more just, as punishment was inevitable if you were a criminal or bad in some way – you would be visited by a messenger (eg. lioness, python behaving in an odd manner and then you would have to go to the diviner who would advise you to do certain things (sacrifice) in order to appease the god.

Rev. said that a lot more people were getting killed these days in spite of talking about God all the time – he still maintains it is because Christianity resolves the ‘sin’ without any penalty or recompense.

Amarachi, Chidima and I went to get the groceries from the market in Owerri for the household - one way of saying thank you to your guest. Chidima was Father Okere's niece who stayed with him and looked after the domestic duties of the house.
Posted by Kate Parsons at 07:29