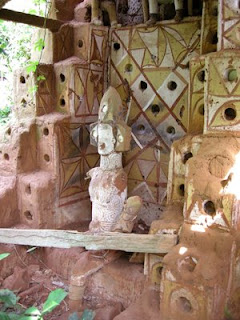 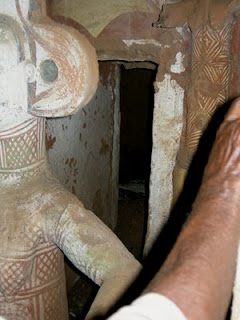 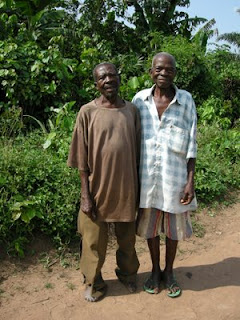 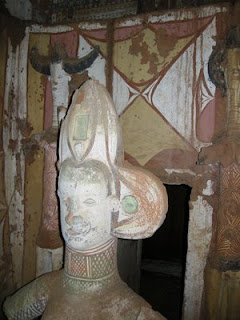 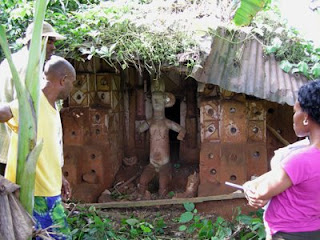 As well as setting out to find particular Mbaris in the areas that Herbert Cole mentioned, we sometimes came across one or two by chance by the roadside, which was exciting, but we dare not get out and explore without permission and gift exchange, which is reasonable but rather killed the moment.

The goddess of this community that owns the Mbari is Alaochala (this is linked to the goddess Ala).

Azuonwu Ekeh (the High Priest here) clears his throat, which invokes the people to listen and is a signal to the gods that an elder wants to pray. Women must be served Kola nut and not take it themselves from the plate.

The initial stages of Mbari is when you start seeing strange things. When you see a strange animal it is the god and so you must go to the diviner to see what to do. Then after consultation and confirmation from the diviner you need to tell the people to celebrate Mbari to avoid the disasters or illness.

Red earth is pounded with water to get a certain quality, you get this from a cave. This was mixed with a material from the market that no longer exists (sand) – like a gum or glue that binds the earth together. A big termite which is found in a cave and is really poisonous is put in "the bowl of water and boil it until it turns yellow" then it "becomes very sticky and gums faster and gives some spiritual quality and so this is mixed with the mud". This adds durability and strength. You also have to struggle to get the material and that is also why the Mbari takes so long to build.

This man AZUONWU EKEH is a reincarnation of a person before who built the Mbari – therefore he was installed – so he had to follow the rules of being a High priest. He is the husband of the goddess now, but he was married in a church and wears a wedding ring. The other man, ATTANASSIUS EKEH his brother, when carrying out the Kola Nut prayer also ended by saying “through Christ”, so here again is this hybrid concept of the two religions. However he tends to err on the traditional side.

In his past life, Azuonwu was also the High Priest of Ala, so he has to carry on from where he left off. The benefit that Ala gives is protection to the community. This goddess is also the protector of the land.

When the church came here a lot of people died, as they ignored Alaochala. The younger generation no longer observe the customs of the people and the goddess never liked this eg. men going off with women all over the place, interrupting an elder, etc. The spirit will choose his successor as High Priest, and the person will hear a knock on their door and disturbs him until he has to go to the diviner. These two men are senior brothers: ATTANASSIUS EKEH is an older brother of the High Priest here. He likes this religion because it has more answers.

This Mbari was made before the Civil War of 1967, as it was opened in 1960. [To calculate dates, often people here as well as in Kenya, will equate events or natural phenomena such as eclipses with specific times].

The messengers here were the Eagle and the Python. The Python was living there in the shrine. It took one and a half years to build and they had “thousands” of women to make this ! Maybe 500! Most women have left for the city so there would have been more women around then. [Although l think there was a slight exaggeration here, as we will find out later with the person who was supposed to have lived for 180 years! Whoops, rather a rough calculation here!]

Amara said how afraid the High Priest was when we went on to see this Mbari. He said he actually saw a python in the central chamber and that Amara must not go in and was visibly shaking. Amara actually believed him, l was around the back at the time!

Cross roads are also important places for sacrifice as this is believed to be where spirits pass at night, and sacrifice usually happens at night.

It transpired that the High priest from this site also had leprosy! Great! Just what l wanted! - but apparently it is not that catching!!

Gave the other High Priest in the morning stomach tablets and of course he wanted more!!! – however at 105 who could blame him!

It seems as if both Amara (Catholic) and Rev Ngozi (Protestant) in spite of their protestations, still seem a bit confused about the Christian and traditional religions (as Mayo was saying previously!). When Amara was talking to Chidima and her friend tonight (who came from the village we have just been to) she was telling them about believing that the devil can actually conjure up strange beasts eg. a large bird like a knife and that such birds really exist. She also believed the old testament had parallels to the African Igbo traditions. Not being a very religious person myself l left them to argue it all out.

Hairy trip back in the taxi as usual! The taxi man carries the top of a small swing bin on the dash which he is supposed to have ‘by order’ of the government in his car but it does not have the bottom to it…apparently it does not fit in the car. Police can demand money from him if he has not got this in his car!

On the way to the sites today, at a roundabout, we had a young policeman with a riffle squeeze himself into the front seat of the taxi in a threatening manner. He told the driver to drive on and was asking the Rev for money, but miraculously the Rev managed to get rid of him! Scary moment though as they all have guns.

Trying to get the research a bit more consistent without offending anyone!
Posted by Kate Parsons at 12:17