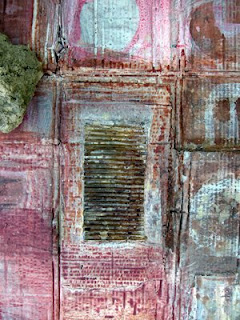 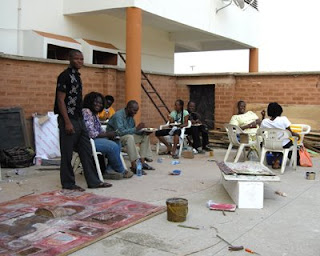 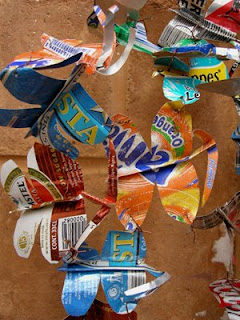 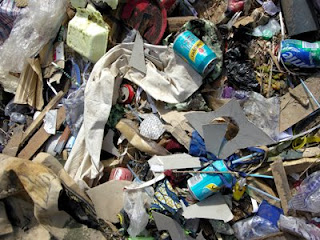 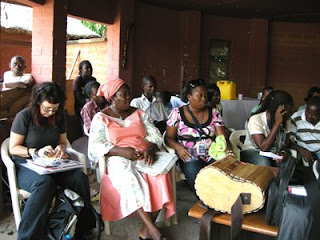 Being scheduled to leave for Owerri tomorrow we waited around the National Gallery to say our goodbyes to the Director of Curatorial Affairs - which we could not do because he did not show up, so off we went to the Cyprian Ekwensi Arts and Culture Centre again, where l managed to get the time to see the 'Art is Everywhere' workshop that was going on for while and talked to some of the artists and photographed their work. This was externally funded and seemed to be regular annual event. They came from different parts of Africa, Uganda, Ghana, Benin, Togo, Cameroon, Nigeria (Calabar and Benin).

I also joined in their final talks about their work, from which l gathered that most of them were self taught. The matter of being self taught, or formally trained at art school, became a point of political discussion for them. The Ghanian artist, although self taught herself, argued that in many ways this is not true, as most often these artists attend workshops like this where they are exposed to outside influences and share ideas with other art makers, they travel abroad now much more, and become influenced by these experiences too as they observe and talk to a variety of people, which was an interesting point.

The work of the Ugandan artist looked the most interesting - he was using a mixture of 'Top Bond' PVA glue with soaked newspaper, corrugated cardboard and paint. It was made in layers like the walls of some shacks l have seen in Kenya. What l found interesting was his use of rocks to hold down the layers of the surface, but to me were a creative addition to the whole work - mind you, l like rocks myself (for formal reasons but they also trigger off memories of place for me) and I filled my pockets with them when flying back home to UK, after the two year contract in Kenya! He also knows William Kavuma who teaches painting at Makerere University in Kampala - small world!

When listening to the artist from Benin (the country, not the Nigerian state) it turned out that the copper and brass he used in his work was stripped from cars, not ships as l had previously read about.

The idea of recycling was almost evangelically promoted by the tutor Tony Odeh as being "so much linked with the environment" by which he meant that it helped to clear up the junk problem that plagued the environment - particularly in Nigerian urban areas it seemed.

We left at around 4pm and went to get chicken, which ended up being tough and scraggy and not much on the bone, but did get some fruit salad!

Passed a bridge that had the slogan "Think Possible".....very appropriate! The last taxi was a really bad driver, driving between lanes and his reactions rather slow, a bit like dodgums - saw at least two accidents today but luckily no one hurt.
Posted by Kate Parsons at 06:22