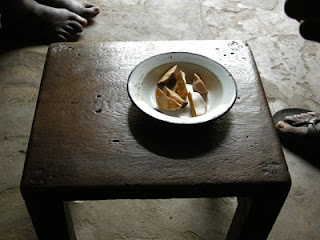 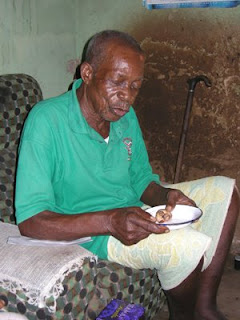 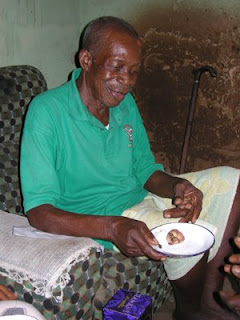 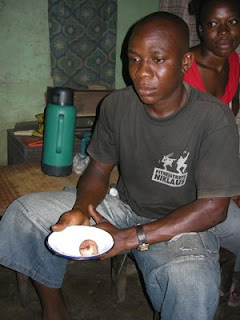 The goddess of this Mbari is Uramarukwa who is a river goddess. She protects people from evil in this village. Built before 1947 might be late 30’s. Between 1929 when the women rioted and before 1941 before the second World War.

Materials: The red earth has come from far and is symbolic, in that its importance is really that it is a natural material and that cement is an invention not nature - so that even if they had cement it would still be made of earth. It symbolises the Igbo’s relationship to the earth. It shows an identity.

Kola nut is given to us in exchange for our gift (schnapps and money). He blessed the Kola nut by saying a prayer over it in Igbo as ‘the Kola nut does not hear English’ – so he will only speak Igbo. The Kola nut is then split into the lobes and handed around. The Kola nut tastes very bitter which makes your tongue curl up and dry, but not objectionable. In fact it is supposed to contain caffeine - coals to Newcastle for me!! The blessing finished with and 'through Christ our Lord”, so although an Igbo traditional prayer, here there seems to be some confusion between the two religions or hybridisation of beliefs.

The photo on the wall behind Clement is a picture of his father who built the Mbari. Clement is the High Priest, and his father before him, and this is his identity. If asked to choose between the religions he would choose Mbari. His first son would inherit it this responsibility. If he did not want to do it, then the next son would do it.

The caretaker(s) can only do what they are told by the High Priest – three caretakers here – who help do the sacrifices (he takes snuff on his tongue at this point). The High Priest is the richest man in the community and this is why the church does not want Mbari to exist – which would mean otherwise that the church would get rich instead! The community still consults the shrine because it still protects them. Cannot tell us some of the secrets eg. when asked about regalia worn during this process – perhaps to keep some mystique - although he dressed up for us on our return from the Mbari. As a High Priest he cannot marry any woman that is not of royal blood.

His walking stick shows his standing in the community – however the stick has several crosses on it and the rosary aluminium pendants also stuck to it. He saw it in the market, liked it and bought it but did not have it commissioned – this explains the Christian symbolism on it!!!

The High Priest commissions the Mbari. The High priest goes to the diviner to ask for an Mbari and then he informs the community to build it. He is the oldest man in this community over 100 years of age. He was born in 1903 (105 years old now). He was married to his first wife when this Mbari was built. He had three wives.

Every god has sub-gods so these have to be represented. The artist is chosen for his skill in the community. A group of artists can be commissioned from another place to build an Mbari if their 'talents' are considered worthy.

Amarachi said the shrine is called “where the ‘face’ of Ala is” therefore where the god actually is. [Often this is in the central chamber]

If there is a resemblance to someone in the figure of the god nothing would happen to that person (unlike at the other sites who said the opposite). The shrine where there are sacrifices is near this Mbari, it must be in the same place or near.
Posted by Kate Parsons at 10:44

Not true...I could not have said that... "Ihu Agbara" translates to the front/face of 'the' god. any god- not necessarily ala. In other words, and simply put, a shrine! It is very much seperate from mbari and its central chamber, as mbari is just an offering to a god; and its' central chamber is as it is, a function of architectural techniques.

But thing is..because mbari is an offering to a god, anybody would be akin to placing a gift by the receiver of this gift. Hence it is known to have an mbari in the neighbourhood of the Ihu agbara(shrine[- to the god-])
And sometimes people are known to go place sacrifices in the mbari house..now that would be like placing a gift on/in a gift. Now I'd say that can be excused as all the gifts are meant for the same person even if they are being muddled up by way of placement or arrangement.