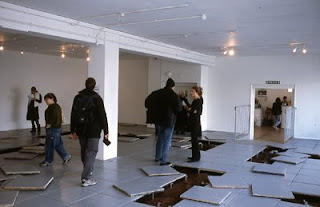 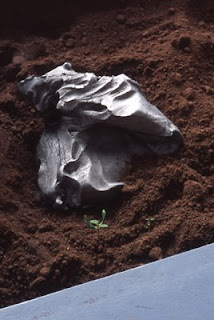 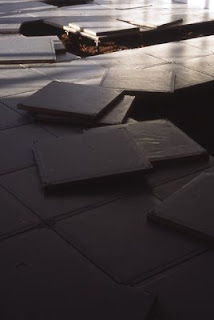 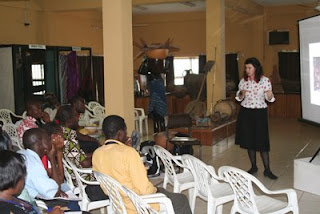 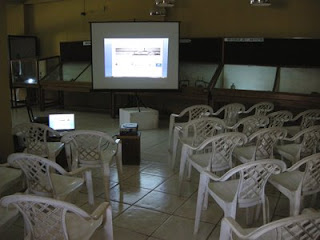 I gave a talk about my artwork and my doctoral research on the Giriama Commemorative Grave Posts in Kenya, which lead on to this current project and collaboration with Amarachi. The title for the talk was 'Shared Perspectives' as my work involves cross cultural interpretations between African culture and that of UK, but this time l wanted to not only compare African cultures but work in tandem with an Igbo artist, using the same subject matter as a jumping off point for making artwork.

The audience consisted of roughly thirty artists from different parts of Africa who were attending a workshop called 'Art is Everywhere' (a lot of them self-taught), staff from the National Commission for Museum and Monuments (including Mayo) and staff from the National Gallery of Art and the Cyprian Ekwensi Arts and Culture Centre. It was well received with a lot of questions asked at the end.

The main questions were:
1 How do you sell your work or make money and why is it that art has less status than other areas of employment. This discussion lead to developing an African audience for art and the impact that art education can make.
2 Two people wanted to know how l did the anthropological research - one was connected to Benin Royalty and he wanted to do some work on his own background, which he said often involved secrecy. The other was a woman who thought it would be difficult for her to investigate something like this - which may be true if she was seen as part of a traditional system, which women are often excluded from. However l encouraged them both to document their cultural heritage as a matter of historical value and cultural identity.
3 Another question addressed the issues of cultural stereotypes and the West's perceptions of an African culture, which was prompted by his travels to Rome, where the expectation was that all Africans lived in 'mud huts' - this myth he felt was a negative response that should be dispelled. I quite agreed, but also explained that l liked the rural areas of the African countryside better than the cities l had visited and l did not necessarily feel that all modern developments were a positive thing in either the West or in Africa. But in terms of artwork, l like to use earth as a material with all its organic connotations and properties and its relationship to natural environments, which stems from my own childhood.
4 There were quite a few direct questions on the materials l used, the processes involved, and the casting techniques in my work. Some of them unfamiliar to them
5 They seemed to be most fascinated by the installation 'Presence/Absence' which l made at the Phoenix Gallery, Brighton, and asked how l got the earth under the floor - they seemed to think l had dug under the gallery floor, rather than lugging 6 tons of earth into the cavities under the suspended floor panels - l suppose it was a bit crazy!!!

No fans or AC so pretty steamy at the end of this.

Went to the Hilton (the only place to get internal flight tickets from) with Amara to fly to Owerri - horrendous chaos here too - a traffic jam up to the entrance of the hotel to start with and then a sort of unruly queue at the flight desks - men barging in all over the place and women looking daggers generally - one man lost the plot after a while - l lost it pretty quickly and sat down while poor Amara did the FULL ON battling! By the time l got back to the 'Vines' l was exhausted.
Posted by Kate Parsons at 10:06