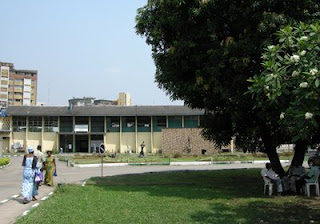 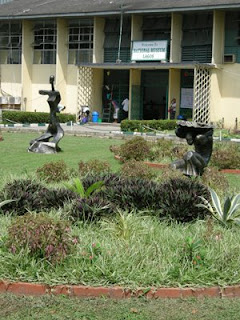 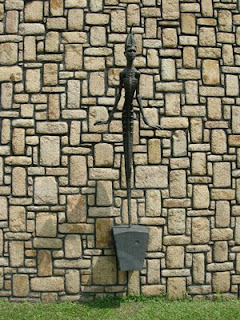 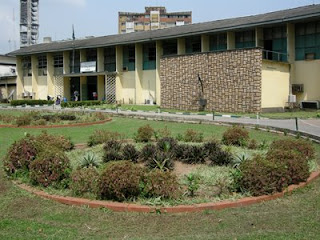 Had a good look at the exhibition space here – there was a local exhibition of mainly paintings. I paced out the floor and drew diagrams. Looked at the publications that the museum produced for potential articles.

Nigerian Heritage Journal of the NCMM. Vol14, 2005 which is produced annually.

No electricity at the museum today so only managed to see the exhibits around the courtyard. Some interesting standing stones made of basalt, the meaning of which was not recorded. Some twin dolls were interesting with bright blue pigment on their heads and what looks like mud or compacted matter lodged around the legs and cracks on the lower body - similar to the ones that Bruce Onobrakpeya had collected. The gallery space looks OK to show provided we have some light. A lot of the photographs of old Lagos, masquerades, dancing etc. were very badly damaged by the sun and general wear and tear as they were not in an enclosed space or protected by glass either.

Other places we went to today were the Jazzhhole for music CDs, Quintessence Gallery which was rather arty crafty and more of a gift shop, Bogibiri Guest House which was full of character but a bit run down and opposite was the former Nimbus Gallery which had been abandoned.

The taxi home as usual was an exciting time - first time Amara and l broke down laughing! The driver had to replace the clutch cable, then the battery was flat, so he had to eventually get out and push the car, then he stalled it in traffic, so again had to push it…this time engaging a street seller to do the pushing – by this time it was getting dark quickly 6 pm. and so the fiasco continued. Eventually we arrived home, AGAIN MIRACULOUSLY!
Posted by Kate Parsons at 08:20