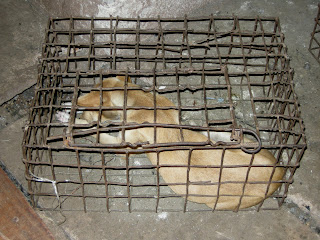 Ike and l were chatting about the rituals involved with the Mbari tradition this morning. He was saying that for the sacrifices all the animals and even eggs had to be local.

If a person owed a lot of dog sacrifices and did not pay his dues, these gods would demand human blood, but again it would have to be a local person.

The gods that demand only dogs to be slaughtered are usually very powerful gods and frequently require sacrifices – their need for blood is constant! There appears to be no visible difference between a dog that is sacrificed and one that is used as a messenger from the gods.

The humans that are prime targets are usually hunch-backs. Ike says that is why you do not see so many around now but there were more about in the 1970’s! It is still a strong practice and people go missing quite often. Apart from this, there is also a trade in human organs! The person to be sacrificed would not know about it because they would be kidnapped.

I am not so sure about child sacrifice, although a lot of people in UK have asked me about it (as they have seen a television programme about children that have been accused of being witches) but as far l know I was not told that this happened in connection with the Mbari tradition. However you wonder who will be next after people with spinal disabilities disappear entirely!

There is however a fear of witches in the villages, not too far from Lagos, as Chignozi (Mrs Thomas's adopted 'daughter') was afraid that witches would get her after dark and was too afraid of going across the landing to the loo and so urinated in the corner of the room. This was cured by giving her a torch and reassuring her that the people around her would protect and care for her.

Referring back to magic Ike said that there are witches and one woman he knew became initiated into this by taking various herbs and drinks and then she felt she was able to fly – he really believed this! He did not feel it was just drug induced. Apparently once you are initiated, and you become a witch, there is no chance of reversing this ritual process.

Amara was also saying how scarred she was of Benin people who did bad magic and could levitate people and things. Ike also talking about and believed in bad magic and evil people. Quite extraordinary that people believe this so strongly still.
Posted by Kate Parsons at 05:33