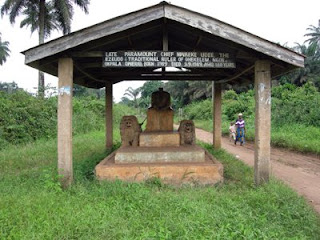 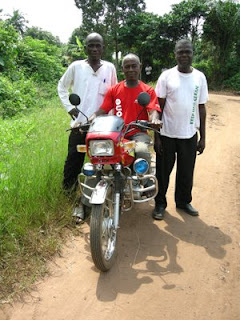 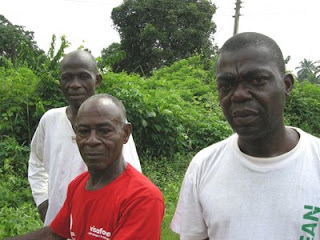 ROMANUS NWEKE (Informant) - his father's name was NWEKE UDEE (who was supposed to have been 180 years old when he died!)

His brothers are in the photo Christian Njoku (youngest) and Deacon of the Church and Chuawuei Ogualiri (his other brother) - not sure whether the use of 'brother' is here used as a euphemism as their surnames do not seem to correspond.

The goddess here was AlaUmudim. They said that this Mbari is no longer there and the bush is too thick to enter, and may be bees there and there may even be buildings on this land now (as often the land no longer retains its sacred status), so cannot go and see where it might have been.

This location is a place that has a strong Christian community. The High Priest died last December and his first son did not want to take it on. The Rev is known by the family so this may effect the research at this site – the person we met looked cagey about talking about he Mbari – l warned the Rev of this and how it may effect the results so asked him to take care with the introduction to try and gain a more honest response.

The tomb to Nweke Udee was made at the entrance to the road and had a sign up to commemorate his death at the age of 180 years old – slight exaggeration here or a slight miscalculation!!! They had celebrated with Mbari five times in his life time. It was one of his sons who took on the Mbari as High priest which was always by divine inheritance. Ajunnwa Nweke (uncle to Romanus) built only one, but started the second one but did not finish it because he died – nothing is left now.

The family moved to another community after 7 years – celebrated Mbari in the new place. After 25 years they moved again to another place – because the god tells you to go and tells you the site. The god tells you who should attend the Mbari celebrations and if someone does not come and has been invited, the god will pester him until he does, but if he is ill and does not want to come because of this, he will get better and so is still made to come. The god will also chase someone away that is not supposed to be there. (Selective participants).

The people making the Mbari were locked up for 6-12 months and excluded from the rest of the community. The Ngbe (people that build the Mbari) rotate four days inside the Mbari and then go out for four days to fetch food and materials but must not be seen as they are considered to be like the god’s messengers, but most people are inside permanently. When they want to collect materials for the Mbari the rest of the community have to stay indoors, so that they do not see the Ngbe come and go. Men and woman have to be chosen by the god to build the Mbari house and can be from another village (some married as well as single). In Umuogbe (village) bamboo as well as palm fronds for roofing have to be brought to the Mbari. Sacrifices are done at the shrine to give thanks for their good fortune. The High Priest is married to the goddess. The Igbo are not moving so often now with the change of life-style. White people brought this change through their Christian religion, employment, education and now live closer to the road to access these amenities more easily. The Igbo embrace change and advancement even to the cost of some traditions. Now there is no god to dictate about moving.

Sacred grounds cannot be kept in tact as developers make roads right through them, so some choices have to be made by the community. ‘Maba’ = sacred ground that belongs to the god, which is a former site of the shrine because the goddess once lived there. Present site of shrine is not sacred, because they believe in Christianity. The house where we talked to this man had stickers and posters to Jehovah, Christ and Roman Catholicism!

The Mbari has to be built like a house (4 corners). The outside walls are decorated as a house used to be. He never went into the inner chamber of the Mbari, so could not say what was inside. He was fearful of it because it was believed the god was in there – afraid of the unknown – but the High priest goes in there.

It is built with red earth and kneaded, plus they got some clay material to mix with it to bind it. This is often obtained from a cave and the clay from the river. It is built using termite earth. The secret chamber of the queen termite is like the chamber of the Mbari – other termites not allowed inside.

Two reasons for using natural materials and/or synthetic materials like cement were 1) Mbari is purely natural to us (and therefore using a natural material like mud/clay is symbolic 2) cement – could be made of this now as they do not believe in Mbari now. Rev: ‘Do you want to see the red mud” means do you want to die? (or be buried!) Dying is equated to the red mud and is therefore respected and feared as it has consequences of sacredness, as well as symbolic value.

Decoration is just decoration, and are just in the imagination of the artist as a reflection of the society.

Even if they do not believe in the god often people still go to a diviner, which seems embedded in the society, which was born out by the Reverend and as we shall see at the diviner coming next!
Posted by Kate Parsons at 02:55