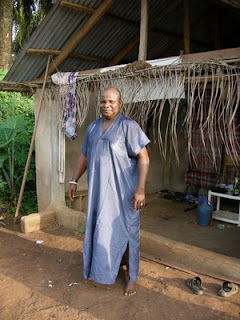 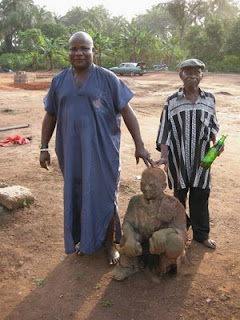 AUSTIN OKECHUKWU EKEH (Informant and High Priest), whose title is also EZE ALA NNORIE (a very aggressive man who has been a soldier for years) - think this bloke is on something and notice he cannot wait to get the booze out and there are remains of chickens in the corner of this concrete shrine.

EKWENAARA is the name of the god here. Ekwe-Na-Aro is the traditional shrine at Umvediabali Nnorie, Ngor-Okpala LGA. The god of Nnorie oversees 8 villages. This spirit has 29 children. You have to have a lot of money and a lot of ‘he’ goats, fowls, cows, as it is a hungry god.

No Mbari exists here but he informs us that a new one is going to be built shortly and he wants to revive the whole tradition, including the rituals associated with it.

The Mbari celebrates wealth, so it is the centre for the god. He tells us that there is a village under the last Mbari a buried city - maybe he has been reading too many Sci-fi novels!!! People put dollars/money on the ground for the god.

He went to get one of the figures from where the Mbari once was using a car to go and get it – it turned out to be a cement statue of a diviner using a cup which looked to us not very authentic. He would not let us go and see where he was getting this from.

After calming down a bit he tells us he feels better from asthema since he came back to the village – he feels less pressure. This is his mother’s place though, his father died when he was 4 years old, so really he is really an outsider, according to Amara and Rev’s impression, therefore a bit of a fake. [I felt a bit sorry for him at this stage, as he obviously seemed a bit disturbed and neurotic, one might assume as a result of things he had to do or had seen in the army, as well as his father dying when he was very young].

The Chief Priest discusses who is going to be the master artist, by going into seclusion for 8 days, and to decide who the other artists are going to be. He will go without food during this time so that he sees/told by the god what to do. In 1965 an Mbari was made – his father’s Mbari. Artists do not have free-reign to do what they want – one master artist, chief priest performs a sacrifice for the artist and they will then see the way it is (what to make). The dead go to the market place and appear as normal people but they can pester people at the market to go to a diviner to sort their problems out.

Trees signify different messages – angels/messengers in the shrine. There was gold, brass, and silver to build this last Mbari – but the ones that were built out of mud are made by the poor! The land was sold to a white man, so all these metal plates have been destroyed! He takes some snuff. People can only do evil under the church but not under the traditional religion.... the Igbo cannot be bad to other people....he has given up being bad! He liberates people from evil spirits, but he is not a herbalist. He comes form Lagos (and the old man next to him, his sidekick) – seems like a bit of a racket to extort and bully people out of money!

Ofo – tree that grows in gods compound in heaven, which symbolises truth. Ogirishi – which is everlasting, does not rot, perennial – used for marking boundaries. Tampering with boundaries is an abomination. Ukpo and Icheku are also boundary markers as they are hardy and do not die.

The Ofo is a sacred tree in Igboland, which means truth and used for swearing or making oaths and can cause instant killing if anyone is playing any monkey business. [It is used like swearing on the bible according to father Okere]

The police blocks on the way home tonight were rather menacing. They stopped us and looked inside with torches as the taxi driver put on his internal light for the police to see inside. There were also fires burning at these blockages which l feared would ignite someone’s leaky petrol tank.... even ours as we all queued up and the seat belts of course don't not work. The traffic was as usual all over the road and night fall with the pot holes is always particularly interesting! Joy! Thank God or god we got back in one piece with all belongings!
Posted by Kate Parsons at 06:18