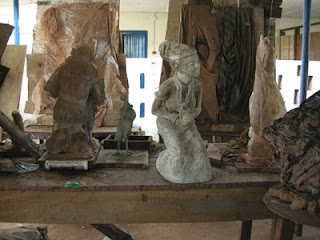 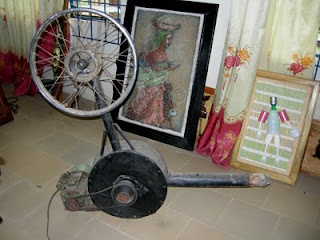 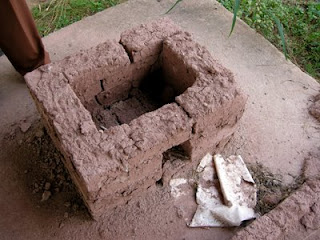 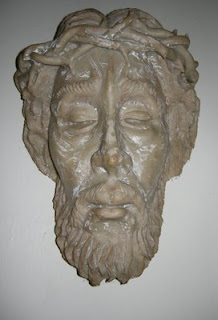 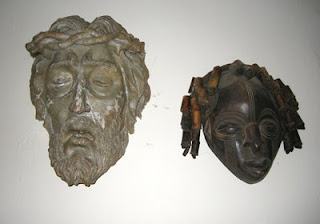 The morning was spent at the house with Franklin doing his usual yelling at the crazy hour of 5 or 6 am and continuing off and on throughout the day.....often because his mother has "beaten him" and then he runs to Chidima in the kitchen.

I am finding that everything that is ever mentionedabout learning, TV programmes, meeting people all seems to revolve around money and how to get to, how much to get, how to be divisive in getting it. This l can understand, seeing how people live but is getting extremely wearing at times. Everyone here either seems to be ‘trading’ or in business, a lot of the time this seems to include dodgy deals (probably why people get shot from time to time) or go into the clergy. Even Amara has a gun shot wound from an armed robbery where she was staying at university!

Amara was telling me that the Pentacostal church practices were like the prophetic aspect of the traditional religion (diviners), , as people can go to them for advice. You can see how, if the new religions take on some of the roles of the former traditions, they are more likely to be accepted. They may decide to go to both, especially if they do not get what they want from one. Either way there is a feeling of fear and things being beyond their control, which seems to draw them to some religious belief for comfort and security. As l have heard a few times now…every human being is religious its natural - which seems to be the case in this country at least!

In the afternoon we went to Imo State University, in Owerri which was a bit shocking in terms of the shabbly buildings and level of academic achievement. There still seems to be such a dearth of books, even now with all the modern technology that they profess to have the corruption prohibits these importations. Most of the dissertations rely on outdated books which bang on about colonialism perpetuating the whole thing.

We met a PhD student and member of staff Francis Ikwuegbu, who was Head of Sculpture. He was making a study of his own traditional religion in Anambra State. He said his father was in the guild or cult and he himself used to make the deities for it. Only his family can make the deities, no other person can make them, as they have to be made a special way a have the power to kill eg. a man or god can change into a leopard and kill – this is in the bush where these gods/deities exist. If a small deity is stolen the person carrying it will find it will get heavier and heavier to carry, and so he will be caught with it and will be sent mad – this is the taboo.

He has converted to Christianity now as his father did not want him to learn how to kill men. However when he goes back into the community, because of his father and the fact that he knows how to make these deities, he is still feared. This community though usually considers someone who leaves the community as an outsider and will withhold information that they consider secret even to their own people, as the cult feel that the outsider/enemy may use this information against them.

It was interesting to see how he now turns his hand to making images of Christ, like masks, almost a straight exchange from one religious visual means of production to another - and both religious patronage!! Also of note is his positioning of the traditional mask he has made next to the one he made in resin of Christ. These hang in his office.

The bronze casting he did in the department was almost just as miraculous given the equipment and facilities to hand!
Posted by Kate Parsons at 11:04