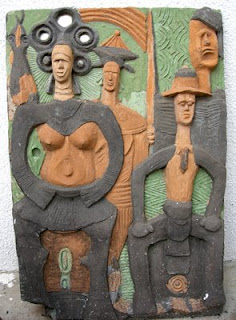 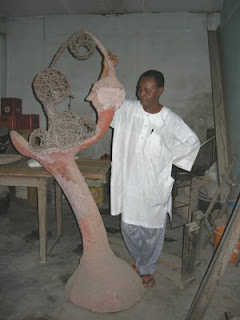 Quite a rare thing Mbari artists now....as not many are being built now and no conservation seems to be being done, although it has been thought about! The making of Mbari is carried on through the family eg.artists – son or daughter follows their father through the generations. Most of the artists who used to do the Mbari are now dead.

When Amara was introduced he told us that 22 girls had become a nun from Amara’s village and said it was a very religious community! In fact Amara has said on numerous occasions that she thought of becoming a nun herself.

Having maxed out on the usual questions, l asked Gogo whether Mbari had an other significance he could tell us about, to which he replied "Every man is religious".

He said Mbari is an art. Ala, who stands for fertility, is in charge of life and represents everything in the community. Mbari is made in order to attract a goddess to give her a home. He calls it a shrine for the goddess to listen to all the communities problems. The python is the messenger to Ala. The mirrors in Ala’s headdress represent the all seeing god, who sees beyond anything, as it is reflective. Amadioha is the husband to Ala the goddess. Then they started putting in Christian ideas. The High Priest commissioned the artists (young men), and brought barren women there to join the young men who often got them pregnant. The ‘Mbari children’ were supposed to have come from the god. They would celebrate this occasion as the god had provided fertility to those women who could not conceive. They had the Mbari festival and then people abandoned the place, until another Mbari was called for and the women needed the children again. Women can go to another man these days if she cannot conceive as there are still a lot of problems with blood groups here, but they still believe it is God that gives the child even if she goes to another man for it. In this case either the husband does not want to know, or the husband chooses one of his friends to do the deed!

The policeman represents the government as a figure in the Mbari. Ofo and Ogu is a philosophy of life.

Red earth is important to build the Mbari with because it is symbolic of the land (Ala). You would not use wood or any other material. The shape of the Mbari is individual to the community. Government and god are all one and once on this ground, or area, you are ruled by this god, whether you are a Christian or not.

Now Mbari is regarded as an artwork. It means art exhibition, cultural expression and gives the example of the Greeks no longer worshiping their gods, and equates it with what has happened here.

His son is a painter, but he is a sculptor. He believes everyone is an artist. He studied at AB University, Zaria and then at the University of Nigeria, Nsukka and has made a career in art education and public commissions. His former name was Prince Anyauwu Alban but now goes under the name of 'Gogo'.
Posted by Kate Parsons at 10:20