Jemima Puddle Duck and the DIVINER 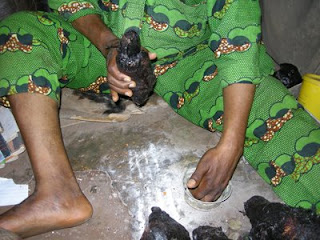 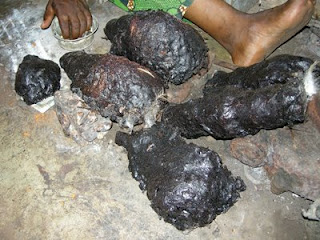 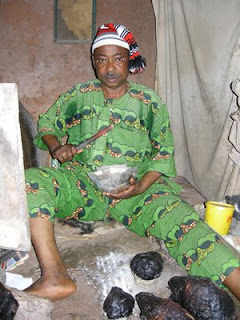 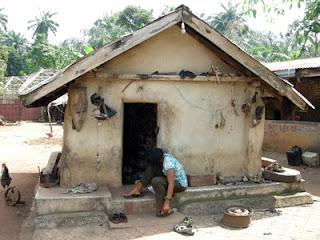 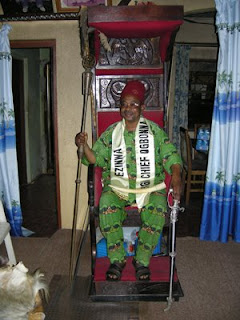 
Before we were party to the performance we were given the chance to see Ogbonna in his chiefs' regalia which he proudly displayed on his 'throne'. He was a very friendly man - this seems to have a resonance with Jemima Puddle Duck!

He was a bit of a character and quite a good performance artist! This was quite a highlight during the field work, although had a 'darkside'. Think the diviner was one of the most interesting places we went to today – however it was horrible to see the caged dogs which Father Okere said may have been put there for imminent sacrifice – 2 dogs, 1 cock, and 3 hens. There were skulls above this big shed and then we went though it into the central compound area where he had his hut with various paraphernalia in it.

He is a herbalist and says he cures madness. He gets the herbs from the bush, some from local bushes and some from the Evil forest. He has to swallow a live heart of a ram in order to become a herbalist! Is this physically possible l ask myself?

He showed us what he does and told us about it as he went alone. The Reverend asked him a question and Amarachi would not go into the hut. A white person can become a herbalist and he has initiated three whites from Jos and Kaduna.

First the customer has to put money on the ground, how much depends on what it is you want to know or sort out. He sits on a goat skin with a chimpanzee skull under his left knee. The Chimpanzee skull confers influence and status because it is rare. Following this he puts 4 chalk lines on the ground. He then puts the chalk at the corners of his eyes which represents ‘the shining’ and gives him the powers to see beyond the physical world. Then he bangs a stick on a tortoise shell to invoke the ancestors, and then he shakes the rattle, (‘Ebe’ name of the rattle). Then to do a reading he continues rattling and then when he stops he puts his cupped hand into a cup of trinkets (beads, bells teeth, pieces of copper, cowie shells, coins etc) and from the patterns he tells you your destiny or answer to a question.

This hut has a secret chamber covered with a cloth to the entrance, which is used for more serious matters where he talks to the oracle for guidance. He would not say what was in there... again secret. The sacrifices were also made outside the hut where you could see the remains of lot of feathers and ash.

Ofo and Ogu are very important to the traditional religion and from talking to people previously it seems it can take many forms, but is basically used in carrying out justice and judgement. He has 3 Ofo 1) his own 2) one of his father’s and 3) his grandfather’s – this comes out once a year in January to celebrated the New Year (New Yam Festival). The sacrifices made are are 1 ram, 1 cock, 1 dog (he), and bottle of hot drink (strong spirit), Kola nuts, and palm wine and alligator pepper. He points the Ofo and Ogu at a person to bless them, or pass judgement on them using his left hand. The patina that looks like tar is blood from the sacrifices and the contents are kept secret!....I asked!

The bell is used to bring in the next customer, but he also used it in this ritual of divination after an incantation. He had two guinea fowl feathers tied together to make a charm, which was used to bless a child. ‘Odo’ is the name of the chalk which brings good luck when rubbed on the face. This is orange in colour and gathered from a stream (light weight and crumbly). He goes to all the shrines and has to make sacrifices – 1 hen, 1 cock, and all the other things, and also over a period of time goes to markets to gain numerous charms for his pot which have to be given to him by another diviner which also builds his reputation.

His blessing to me was for a safe journey which he did by blowing on my two hands, with which you then touch your forehead and then chest.

The pile of tin boxes contained ofo and ogu of Christians that do not want to take them back to their house, so they are kept there in secret from their family. He opened one and told me l could only touch a woman's ofo! 'Ofo' is a special wood and used in the form of a stick. In fact l thought it was a dried up penis of something, which the Diviner thought was very funny!!! - bang goes that stereotype!!! Ofo and Ogu are a form of justice and fairness which is a very important part of Igbo traditional religious practice.

He has a weird cement figure in army uniform strung with hand grenades at the entrance to his gate - the Reverend seemed to think this was to warn people to beware!
Posted by Kate Parsons at 04:38