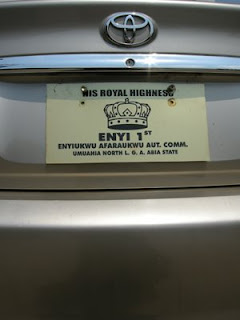 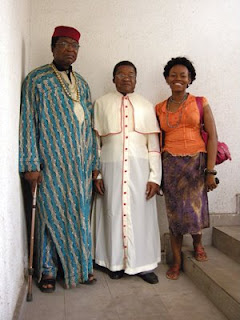 Amara's uncle who lives at Umahia is an 'Eze', which is akin to royalty - note the car number plate!

The 'Eze' system was set up by the colonialists and was not much liked amongst the Igbo, as they tended to run their internal affairs democratically. The Hausa and the Yoruba had natural heads of state in Shieks and Kingships respectively, which the colonialists found suited their own ends as they could manipulate the people through them. The Igbo have always remained rebellious in this way, according to Father Okere.

As well as being an Eze, Amara's uncle is the chief of the area and so must have quite a bit of responsibility for the community. It was very nice of him and his wife to extend their very kind hospitality to me and it was lovely to be amongst the whole family.

We spent today racing around getting her other Uncle dressed up for photographs, as his inauguration as Monsenior was imminent - however without the purple sash and red boxed hat with tassel, which must have set off this rig-out nicely.
Posted by Kate Parsons at 13:18