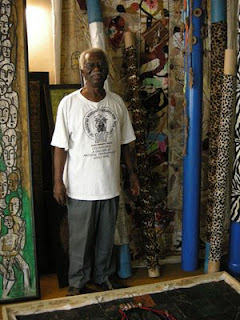 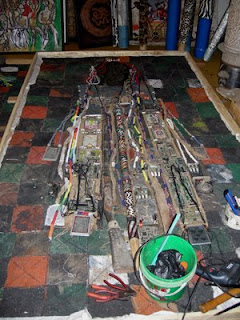 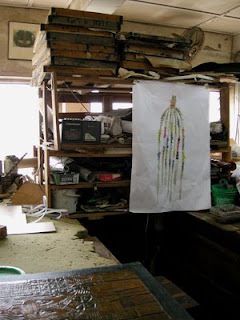 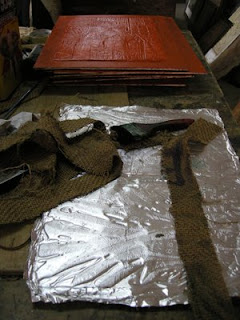 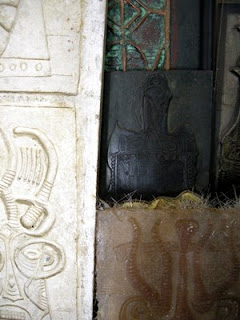 He works directly by carving into slabs of plaster creating negative shapes and then makes the positive form from this out of fibreglass resin. Some works look as if they are beaten into the mould using a tin and aluminium alloy which is relatively soft, and then mounted on wood and painted – these look like printing blocks. He replicates his work on a) different surfaces b) different scales and c) colour ways, capitalising on his output.

He is very influenced by indigenous cultural artefacts and often obtains these from Lekki market. He is making a shrine at the moment and likes using ethnographic pieces he finds in Lekki market as inspiration, which local people are afraid of and associate with ‘fetish’ or non-Christian values eg. false gods and idols which the church still promotes as bad. Bruce denies being part of any actual cult (as rumour has it!) but uses the knowledge from the past to inform his present and future works.

I told him about the burning of a piece of his work by Bumi’s uncle, Ike. Ike had this print up in his office and he was told by numerous people that the print was evil and that he should get rid of it - one of these people was a priest. He said he had bad things happen to him to do with his business, so he burnt it. When l asked him how he knew that the print had been the direct cause of these unusual events, he just said that the things that had happened could not be linked with anything else and that is how he knew to destroy it! Bruce did not seem to be bothered, saying that it is life, the work is made and exists and then he forgets it and then moves on to a new piece – likewise with a deteriorating relief in resin I saw in a dark corner downstairs, where the material was becoming very unstable.

His work is also very influenced by Modernism, especial Henry Moore (totem figures) and he had painted an equivalent of Cezannes’s The Bathers’ and is likewise influenced by Matisse's 'Dancers'. He likened art to life and told the story of his mentor, a Mexican artist, who told him that even if he did not make it as an artist (himself) he would have to keep going – he had no other option. He had also been influenced by an Ethiopean Calligrapher/artist.

Bruce mentioned how Gauguin would not have painted what he did and became known for it unless he was actually in Tahiti and the South Seas, so like him Bruce is very influenced very the culture he lives in and his own background which is Yoruba . His son, Mudiare, said he knew a lot about Art History and indeed he said himself that he owed a lot to other cultures.

He uses aluminium sheet for his etchings using beeswax to mask out the plates and instead of Hydrochloric acid uses ‘Dutch modern’ to bite into the surface.

His house was on various floors, the basement being offices, textile and storage area, the second floor living quarters and more work rooms, and the top floor was a printing workshop where his assistants were busy working. Bruce employs about 8 assistants with one studio manager who seemed to be working on Bruce’s latest textile pieces incorporating spark plugs, bones (fish) beads, computer circuit boards, hessian type cloth background made into sections of different colours (see image). Bruce showed him what he wanted doing and then left the assistant sewing these down for him. In the corner of the room were plastic pipes that he was putting stringed beads (and other items ) on dangling down and various leopard prints, etc on to them. In the sitting-room area Mudiare showed us a piece called 'Royal Vignette (1987), which he considered to be a seminal piece.

Bruce told us that he made books as a form of documentation of his work and practice. One of his early books was divided into half of it being about the process of his work and the other images of this work. He also had a book of all/any press cuttings. Bruce teaches to complement his art practice.

He has a huge warehouse/building in the Delta region where his other works are stored and where he runs the annual Harmattan workshops inviting artists to attend at approx £125 for the duration of the course. These workshops are a cross between a conference and a residency for artists, and as well as teaching himself, he invites guest speakers and other artists to come together to create this forum.
Posted by Kate Parsons at 06:29