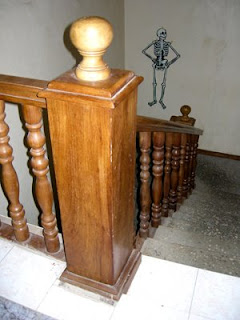 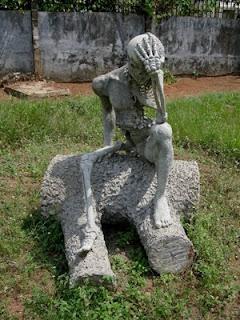 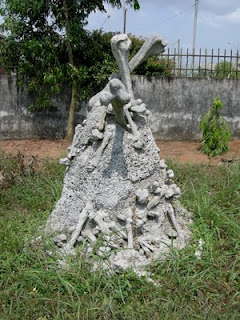 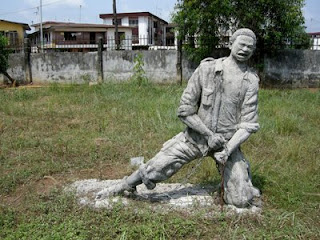 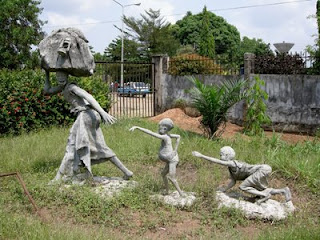 Went to the Father Okere's library he has set up adjoining the Catholic mission in Owerri, this is called the Whelan Research Library. Father Okere has donated all his own books to the library and hopes to enlarge on this from donations. I gave my copy of Herbert Cole's book "Mbari" to him as a gift and a donation (in exchange for his kind hospitality) with which he is going to use to buy a series of books by contemporary African writers or set up the internet here for researchers to use. Either sounds a great idea!

I looked through some of the books on African proverbs in 'One Hundred African Proverbs and Sayings' by Oliver Cromwell Nze Chikwu (1986) - fantastic name Oliver Cromwell!! What have we done! One of the sayings l liked which to me tied in with the Mbari was "If night does something, day knows about it. Every secret many times comes to light" which basically means there is no secret which sooner or later will not be discovered.

There were interesting sculptures in the grounds of this building basically depicting slavery and the Biafran War, which was all around Owerri.

On a lighter note another road sign said 'Better not to be late than delayed" .............thought at first this is a contradiction but its real meaning was better to arrive late than dead.

Photocopied more literature on Mbari which l read and thought about ideas for making artwork from what l had seen, been told, and experienced since l arrived. The skeleton on the stairs was still holding on!!
Posted by Kate Parsons at 10:17