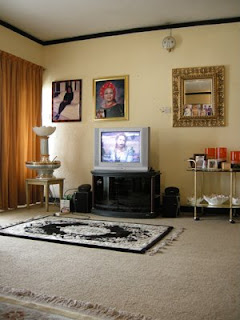 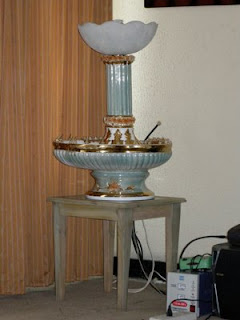 Went to see one of Mrs Thomas's friends who had been married to an important politican at one time. This is a photograph of her sitting-room.

We discussed the research which lead on to her talking about her belief in the evil shrines. She knew of an Anambra shrine where she saw human skeletons. She confirmed the ideas of killing hunch-backs and how there was quite a bit of money to be made in human sacrifice. She said she spent eleven years in the US and her father did not believe in any religion, and so was brought up without any particular religious views, but she still believed in the fear of these shrines and the evil they could transmit. She talked about the ‘Ofor stick’ (used to pass judgement on someone by pointing at the person) that I was given by Sylvester, and she warned that if you use it it will surely work, but you have to make sure that you are without blemish too for it to work, or it will back-fire on you.

The fear of the unknown is still very powerful in Nigeria. Some of these mysteries however could be dispelled or accounted for by more scientific /psychological knowledge though.
Posted by Kate Parsons at 08:57